skip to main | skip to sidebar

All EST emblems and Images are copyright protected.

Do not duplicated or copy any EST images or emblems without permission. All photos are personal property or used with permission. 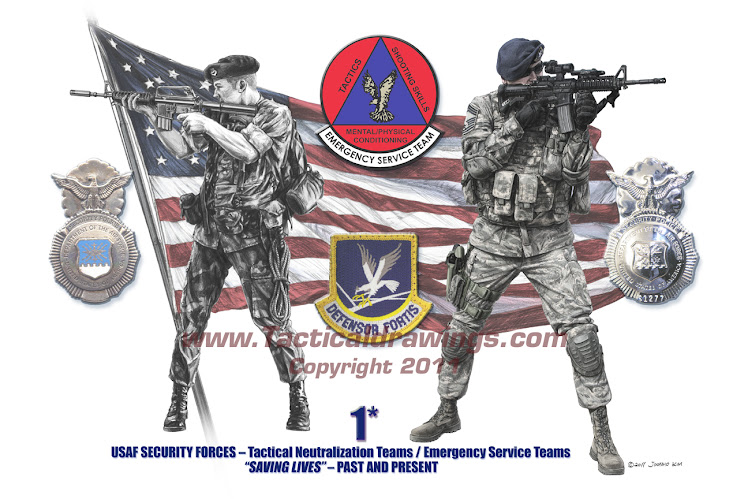 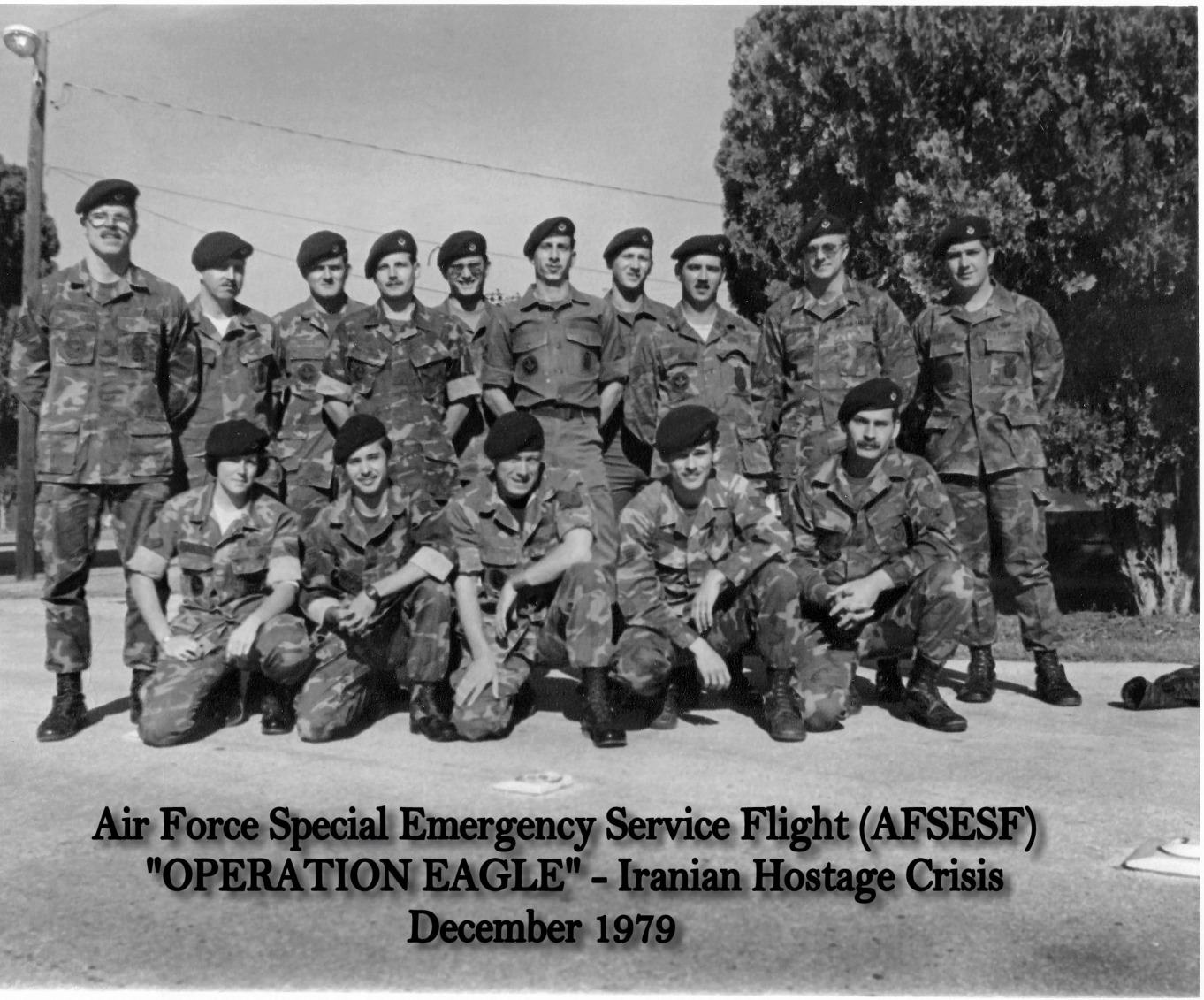 
1*
Dedicated to the men and women of the USAF Security Forces/Security Police who were active members of the Emergency Service Teams; to those who were EST Field Supervisors and helped trained numerous teams that supported high risk operations on and off Air Force installations and in support of other agencies.
To that small group of instructors who put us through the paces and gave us the confidence to train other teams... "We Salute You!"

If you are interested in seeing these historical photos, please come join us at our Yahoo Group Website. See the link below: E.S.T. Operators, Past and Present... ***Special thanks to the SP Museum Curator for sending us the Class Photos*** Milita Rios-Samaniego Museum Director/Curator USAF Security Forces Museum Lackland AFB, TX 78236-5429*** *PLEASE DROP HER A THANK YOU NOTE AND DON'T FORGET TO DONATE TO THE MUSEUM, IT'S OUR LEGACY!***

For more videos - go to : http://www.tacticalimpact.tv/

Thanks to TSgt Justin King for showing us the link to the video, and thanks to the Air Force Audio/Visual people at Lackland AFB for putting it together.

In Memory of Operator Neal A. Aldridge, TSgt, USAF Retired

Tribute ...Speaks for itself. Dedicated to all our Security Forces

The Defender Project - Time to Start Writing!! Support this Project!

The Defender Project ------ Click on The Defender Project! ----Air Police, Security Police, Security Forces----- -------------From working Customs for the Marines going into Okinawa to running dismounted patrols outside Bagram to parachuting into Iraq, SF members have seen, experienced, enjoyed or endured many different experiences, hardships and dangers in the performance of their duties. Defenders have guarded the B-29s that dropped Little Boy and Fat Man, patrolled Kimpo Air Base in the bitter cold, hunted VC outside Pleiku, escorted convoys throughout Afghanistan and Iraq, and of course performed law enforcement missions in every corner of the world. -----------It’s time to tell some of those stories.

Keflavik Emergency Service Team - Thanks to SFGONEPOSTAL for posting on You Tube.

The Final Option - Our Favorite Movie - "Who Dares Wins"

It's on Google Video... Check it out - Samuel L. Jackson Song from the Original Movie "SWAT" See the movie trailer below

Remembering One Of Our Own - Security Forces Erik Hite -Rest In Peace, Brother. 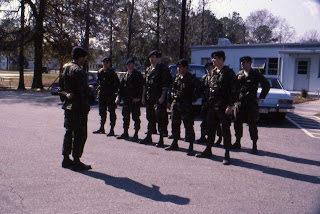 Cammie was my friend, we worked together at Charleston Air Force Base, South Carolina, assigned to the 437th Security Police Squadron, and it was during that time in the late 70's and early 80's that we forged a bond of friendship that I will never forget.

"Cammie" passed away last week on March 21st, after a courageous battle with cancer, he is survived by his wonderful wife, Patsy and his wonderful daughter, Miranda and all his life-long friends.
If there is one thing I do remember about "Cammie", he was thoughtful, had a heart of gold, and cared... really cared. He is one of the "good guys" and he will be missed.

Cammie was with what was then known as, Security Police (currently Security Forces), as a security specialist, who loved working as the squadron armorer and volunteering his free time to train E.S.T. members. Just look at the pictures below, they speak louder than what I can write here about him. (To see an enlarged version of the photos, double click on them) 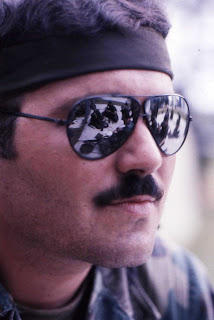 Look at the reflection in his mirrored glasses, getting ready for a deployment exercise; by the way, those mirrored glasses, a trademark with him in those days, I don't know if there was ever a day when he didn't have them on. 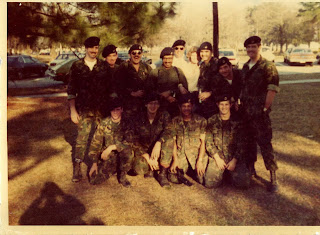 Standing in the picture above, back row, third from the left: Look at that big smile, after completing a whole week of E.S.T. training to qualify for the team... "Robert Oh... (instead of calling me Roberto)... time for some Waskey and coke"... 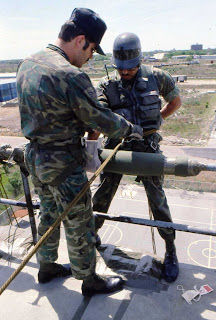 "Cammie" graduated from the E.S.T. school and here we are getting ready to train some future "Operators" in the art of rappelling. His Kentucky upbringing only added to his talent as a trainer.

There he is, standing behind me, involved in river crossing training with our team members and our 44-man ABGD team, getting ready for a MajCom exercise, "Cammie" was always there, being a "team player" and lending his expertise to those who sought it.

SECURITY FORCE CREED: I am a security force member. I hold allegiance to my country, devotion to duty, and personal integrity above all. I wear my shield of authority with dignity and restraint, and promote by example high standards of conduct, appearance, courtesy, and performance. I seek no favor because of my position. I perform my duties in a firm, courteous, and impartial manner, irrespective of a person's color, race, religion, national origin, or sex. I strive to merit the respect of my fellow airmen and all with whom I come in contact. 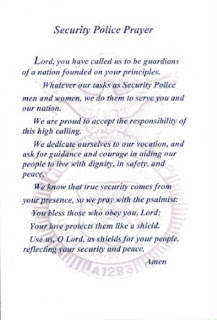 History of the Security Police Prayer below, click to enlarge: 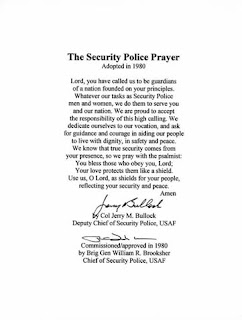 Give Generously To Help Our Own!

Join our Yahoo Group E.S.T. Operators Past and Present 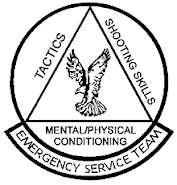 The "I'm no longer a Padawon" Tactical Operator Badge

In honor of Ed Bennett Finally Completing a Mission!

http://www.pittofhorror.com/message/index.htm Polish actress (real name Petrovna) whose birth is shrouded in the mists of war-torn East Europe and who eventually became a minor cult figure of British horror films, that traded on her voluptuous figure. Hall of Fame Nomination by "el jefe" and "Mikey" Photo courtesy of Ingrid Pitt Fan Web Site

Photo Scan of Original E.S.T. Design© by then SSgt Bonefont, 437th SPS, Charleston AFB, S.C. 1981 Note: I don't remember the Audio/Visual Specialist who put it together for me, but I want to thank him again.

Dedicated to the men and women of the USAF Security Forces/Security Police who were active members of the Emergency Service Teams; to those who were EST Field Supervisors and helped trained numerous teams that supported high risk operations on and off Air Force installations and in support of other agencies. Views expressed on this blog do not represent US Air Force or any of its policies, this is a privately owned blog, photo credit is given when known. This collage of photos and design was done by an audio/visual artist from Langley AFB, VA...can't remember her name, but thanks so much. 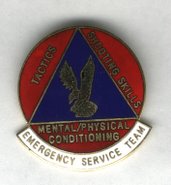 Courtesy of Michael Tsung, MSgt, USAF Retired, who used his own money to have these made, he came up with the color concept and eventually there was a subdued patch created as well. Actually worn on SP Beret before the SF "Defensor Fortis" Emblem.